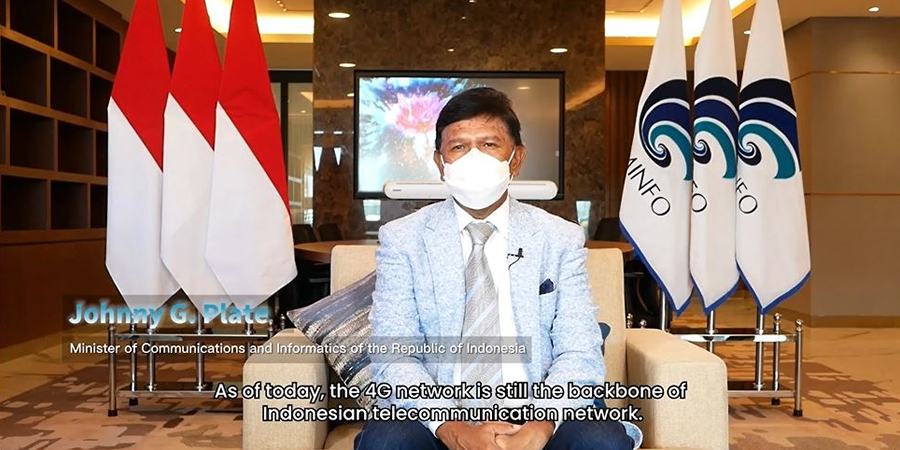 On its road to the Mobile World Congress 2022 in Barcelona, ZTE had an opportunity to conduct an interview with the Minister of Communications and Informatics Johnny G. Plate about 5G network and how it will play a crucial role in accelerating digital transformation and economic growth. The Minister stated that even though as of now 4G network is still the backbone of telecommunication network in Indonesia, deployment of 5G in the country has started. Moving forward, the government plans to accelerate the deployment of 5G network to unlock the growth potential across multiple industries.

To support the 5G network, the government is preparing various spectrum bands through the farming and refarming of frequency spectrum in all level bands: low band, capacity band, and super high band. As of now, the Minister said that three national cellular operators, Telkomsel, Indosat, and XL Axiata have received government approvals to commence their commercial 5G service within Indonesia and will be available in selected residential areas and hotspots in 13 major cities. The 5G Experience will also be held at the Mandalika MotoGP 2022 and at the G20 summit this year.

Another priority initiative by the Ministry of Communication and Informatics is the Analog Switch Off/ASO (Migration to Digital TV). As a result of broadcast Analog Switch Off (ASO), 112 MHz digital dividend in 700 MHz spectrum will be available to support 4G and 5G technology in Indonesia on top of coverage band and super high band spectrum. The Minister stated that the government is currently preparing frequency spectrum balance sheet to anticipate the fast growth of telecommunication and digital technology in Indonesia.

However, as the largest country in ASEAN with a vast landscape and topography, as well as a population of more than 273 million inhabitants, it is quite challenging for Indonesia to build widespread telecommunication infrastructure all across the country. The government, in collaboration with multiple stakeholders including private sector and companies, is taking crucial steps to advance Indonesia’s digital connectivity, particularly in the frontier and rural regions. The ambitious BAKTI program designed by the Ministry of Communications and Informatics Indonesia is set out to achieve telecommunication connectivity all across the archipelago, because providing connectivity has been proven to improve digital entrepreneurship and the welfare of Indonesians.

As 4G and 5G networks continue to grow in the next five years, usage of 5G will also broaden and vary, and this will certainly affect the ICT industry in Indonesia. The government plans to continue to expand commercial 5G network that is aligned with Indonesia's digital transformation agenda. This aims to unlock the digital potential of the entire nation, as outlined in Indonesia's Digital Roadmap 2021-2024.

“It is also imperative and we certainly encourage global technology companies, including ZTE, to comply with 35% of local content for 4G and 5G ICT system and devices, to support an inclusive and resilient digital breakthrough and innovation in Indonesia. I personally invite technology companies such as ZTE which is already working closely with the Ministry of Telecommunication and Informatics, to do more, invest more, and to improve collaboration with Indonesia and China, and Indonesia and ZTE,” said Minister of Communications and Informatics Johnny G. Plate.

ZTE’s interview with the Minister of Communications and Informatics Johnny G. Plate was screened in the ZTE’s booth at Mobile World Congress (MWC) 2022 in Barcelona, which took place from 28 February to 3 March, 2022. At MWC 2022, ZTE released a series of new 5G products and solutions that showcase ZTE’s commitment toward building the simplest 5G network with high energy efficiency, boosting digital transformation of industries with all-in-one private network and enabling complex network to be operated with ease.

“ZTE adheres to our core principle of ‘technology creates value’, and our core positioning as ‘the driver of the digital economy’. This is aligned with our commitment to support the Indonesia government to accelerate digital transformation and boost its economic growth. As a partner for 5G development, ZTE will continue to offer innovative and cutting-edge infrastructure solutions for large-scale commercialization of 5G networks in Indonesia,” said Richard Liang Weiqi, President Director of ZTE Indonesia.

Please click this link to see the full version of the interview.