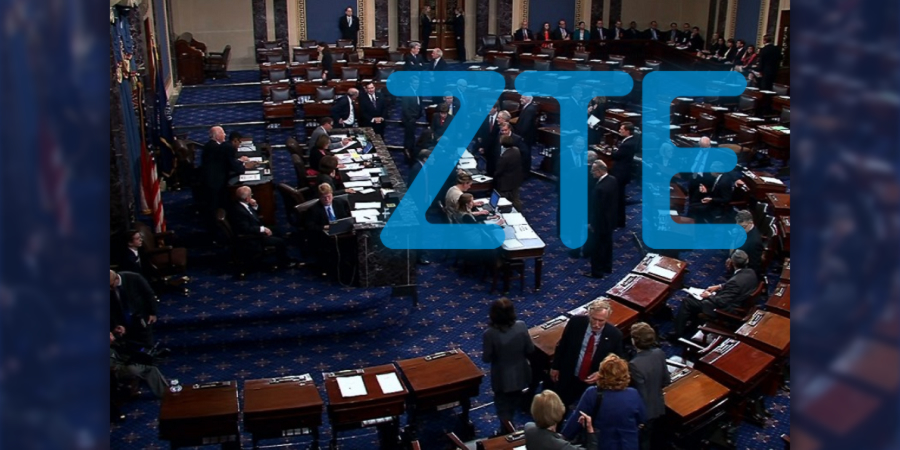 The US Senate has sensationally voted overwhelmingly to re-impose the draconian ban on Chinese telecommunications behemoth ZTE.

The US Department of Commerce prohibited US companies from selling hardware and software components to the company for a period of seven years, after it claimed ZTE had failed to make changes to its management board after being found guilty of violating trade sanctions with North Korea and Iran in 2016.

ZTE were forced to suspend all major operating activities as a result of the ban and it heightened the on-going trade tensions between Beijing and Washington. However, the Trump administration offered the Chinese vendor a lifeline by easing the sanctions in exchange for a $1.4bn fine on the company.

However, that deal by the Trump administration is now dead in the water after senators added an amendment targeting ZTE into a sweeping, must-pass national defense spending bill that cleared the chamber on an 85-10 vote.

The measure implemented by the Senate proposes an outright ban on the government purchasing products and services from ZTE and its domestic rivals Huawei.

A bipartisan group of senators said the protection of American jobs must come ahead of making deals with countries like China.

A spokesman for the group said, “We're heartened that both parties made it clear that protecting American jobs and national security must come first when making deals with countries like China, which has a history of having little regard for either.”

The lawmakers, who introduced the amendment, include top Democrat Chuck Schumer and Republican Marco Rubio. The House of Representatives passed its own version of the measure, and the two chambers must now hash out a compromise.

"It is vital that our colleagues in the House keep this bipartisan provision in the bill as it heads towards a conference," Schumer and Rubio said.

ZTE, which employs 80,000 people, has seen its shares plunge since re-entering the US market this week. Now the decision to re-impose the ban by the US Senate has been made, shares have unsurprisingly plummeted even further.

The Chinese vendors fiber-optic networks depend on US components and its cheap smartphones sold abroad are powered by US chips and the Android operating system.