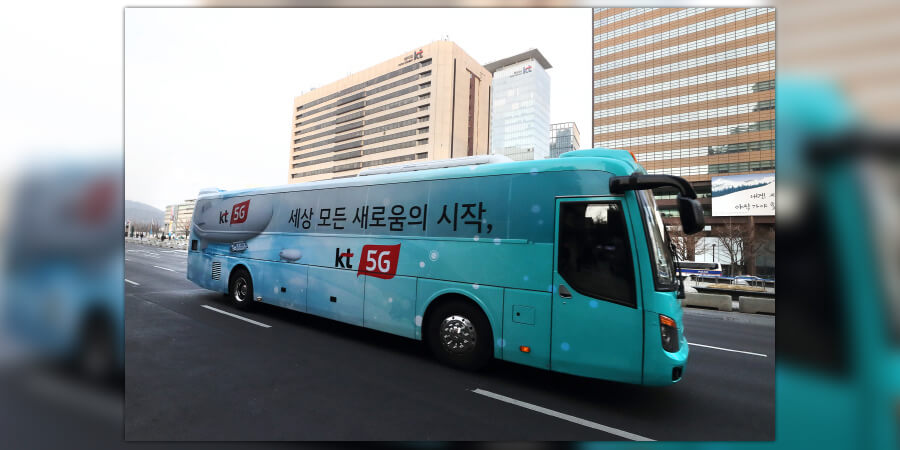 The Korean telecom leader is expanding into new businesses using intelligent machines with various business-to-business (B2B) operators. To lead the so-called Fourth-Industrial Revolution, KT Chairman Hwang Chang-Gyu is transforming the company into an intelligent platform for innovation in the new 5G era.

"South Korea is leading the new 5G world," Chairman Hwang said at the World Economic Forum Annual Meeting held in Davos, Switzerland last week. "The new 5G network's ultra-connectivity and ultra-low latency will greatly contribute to human welfare not only in Korea, but also around the world."

The 5G network's ultra-connectivity will be a milestone in distributing the benefits of the Fourth Industrial Revolution. The network's ultra-low latency promises new conveniences, such as autonomous driving, telemedicine and more.

GiGA Live TV is a wireless network-based, next-generation service that does not require separate terminals such as a smartphone. Bus passengers could experience high-quality immersive media services from GiGA Live TV, which are available through a 5G mobile hotspot (MHS) catching signals from nearby base stations.

At the Davos forum, Chairman Hwang also announced an innovative way to prevent the spread of infectious diseases throughout the globe. This would involve the transportation of medical supplies or vaccines to developing countries through KT's next-generation platform for disaster and safety management, SKYSHIP.

KT unveiled the SKYSHIP platform in July last year, which operates a special aircraft and a mobile communication center to remotely control drones and robots. SKYSHIP was launched to carry out vital search and rescue operations for disaster survivors. Rescuers are able to communicate with medical staff at nearby hospitals through VR glasses when administering emergency treatments.

Together with KT's Global Epidemic Prevention Platform (GEPP), SKYSHIP's new medical delivery system will stem potential outbreaks and infections. Further, KT's technology can analyze location-based information, including the roaming data that it collects, to guide its customers on how to better prevent epidemics and build new disease monitoring systems.

GEPP is a global initiative to fight the spread of disease through new technology. To help protect the health and safety of people in Africa and elsewhere, KT is going to build a GEPP in Kenya with its local counterpart Safaricom and health authorities.

KT successfully demonstrated the world's first 5G trial services during the PyeongChang Winter Olympic Games in February 2018. The company, in December last year, held a historic ceremony to commemorate the start of its commercial 5G network. The full-scale, official launch is coming in March.

KT deployed the first phase of its 5G network in November last year. The new service has begun in the greater Seoul metropolitan area, in the country's most populated, major metropolitan cities outside Seoul and in isolated areas including Jeju, Ulleung and Dok islands.

KT will focus on the development of five key areas: smart cities, smart factories, connected cars, 5G media and the 5G cloud. To provide innovative services for its mobile users, the company is working with partners in Korea and around the world, such as Samsung Electronics, Hyundai Mobis, Posco, Intel, Ericsson, Nvidia and Qualcomm.

To become a leader in global technology, KT is sharing its expertise in 5G with the rest of the world. The company believes its knowledge will accelerate the commercialization of next-generation wireless connectivity.

South Korea's commercial 5G network is expected to create at least 30.3 trillion won in socioeconomic value in 2025, 1.5 percent of the country's gross domestic product (GDP), according to a report by the KT Economic and Management Research Institute (KT EMRI). The report forecasts that number will increase to at least 47.8 trillion won, which is 2.1 percent of the GDP, in 2030.